It’s All Okay … We Have Travel Insurance

While Jackson scrapes the burned vestiges of rice off the stove and Jack edits a powerpoint (stay tuned to found out why!), that leaves Ian (me) to write this week’s post. It’s been two weeks since we gave a status update about our adventures, but we can assure you that there’s been more than two weeks of happenings since then.

February 1 was the opening ceremony for Rijeka’s time as a 2020 European Capital of Culture. We spent most of the day wandering the streets of Rijeka, seeing short musical performances, street art, historical displays, and choreographed dances. It was awesome to see people from all over Croatia (and Europe) coming together in one place to spend time with each other and to celebrate this incredible city.
In the early afternoon we met up with our friend Damir Kolich, a Webb Alumni from Croatia, who showed us the sights and provided much-needed context for a lot of what we saw. After visiting a museum, eating pizza, and having a great time, we descended together with thousands of people to a performance stage set up on the Rijeka waterfront. The four of us bundled up as rain poured down and the music turned up. Rijeka’s chosen theme for the Capital of European culture: Opera Industriale. Memories of time spent in shipyards were recalled as dozens of grinders spewed sparks from the port’s cranes, pyrotechnics lit up the audience, and traditional fishing boats drifted into view on the nighttime breeze. Before long, the most disconcerting children’s choir we have ever heard began chanting, a man in a jumpsuit began yelling, and then a heavy metal group bathed the audience in drum and guitar solos. We heard a tale about the history of Rijeka as performers acted out the struggles of the working class and several choirs broke out in competing songs. The rain abated just in time for a point-blank firework show of epic proportions. We were in such close proximity to the display that Jack had to pull pieces of spent fireworks off his face. We ended the night with another wonderful conversation with Damir, and look forward to seeing him at the Webb regional event in New York. Jack and Jackson stayed longer to chase the Halunke bell ringers and find the all-night rave in the tunnel under the city. 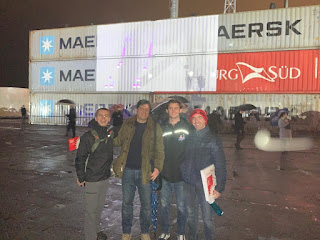 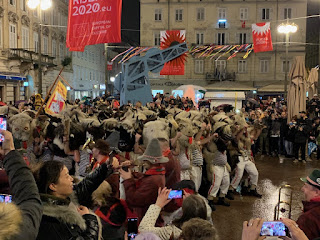 Sunday was a recovery day from the previous day’s festivities, and by the time Jack and Jackson woke up, Ian was already returning from hiking up the nearby mountain Ucka. Unfortunately, the fog was so dense that visibility at the 1400-meter summit was about fifteen meters.
We spent the following week at work developing general arrangements for sales support, conducting multihull resistance research, and fabricating marine objects in Rhino.
After a busy week at work, we embarked on our 700-kilometer journey to Zermatt, Switzerland. This secluded town is home to the famed Matterhorn, a spectacular peak and the defining feature on Toblerone chocolate packets (see figure below). We fell in love with the town from our first hour there, since no cars are allowed, electric taxis roam the same streets as pedestrians, and a train is necessary to access the area in the first place. Jackson: “This whole town is literally about worshipping nature.” 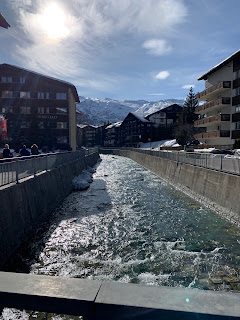 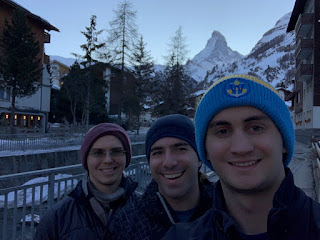 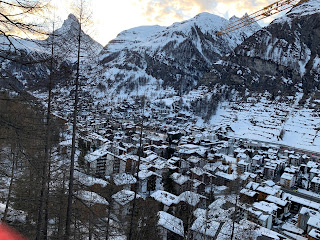 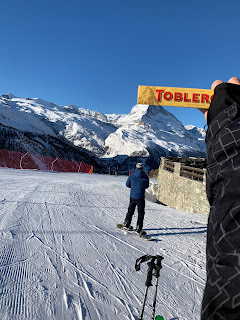 Pretty as Zermatt is, the town wasn’t our main reason for driving eight hours. We were there to ski. Some of the ski lifts take a full forty minutes to ride to the top of a run, and the descents can last for hours. We (well, some more than others) acclimated quickly to being back on skis and leaving powdery rooster tails down the mountains. 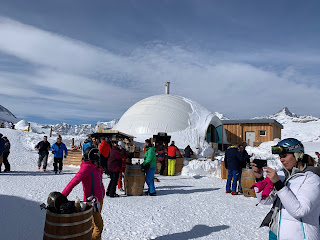 Ian had just started “to really feel it” when he caught an edge and rolled down a steep section of one run, which resulted in some very lethargic skiing to the ski patrol, who strongly recommended he get off the mountain. To avoid Ian paying 300 Franks for a snowmobile ride, Jack and Jackson helped their wounded comrade to chair lift after chair lift until all three were back on the valley floor. Swiss physicians aren’t known for being affordable, and the running joke of “at least we have travel insurance” finally became reality for one of us.

Jack and Jackson, now rested and freshly unburdened, skied, raced each other, and shamelessly left the mountain as the ski patrol escorted them down at sunset because they wouldn’t leave otherwise. 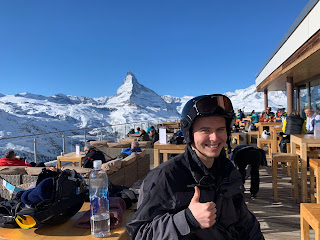 The next day, with Jack and Jackson feeling strong and Ian walking again, all three of us journeyed by various means to the Glacier Paradise, overlooking the entire valley and the Matterhorn. Hot chocolate, Swiss Rosti, and pasta fueled our efforts. 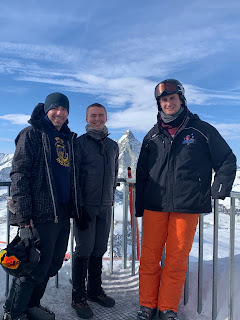 Jackson took his only wipeout on day two when he hit a corner too fast and found himself skiing in the open air. After an unknown period of time, he stuck his head up from under the snow, realized he was very, very far off trail, and set about backcountry skiing to go find civilization. After following a river for a while he came across another trail. 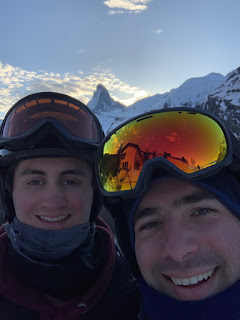 With the sun setting, the three of us wandered Zermatt one last time as musical groups and skiers set about their après-ski adventures. It was a lively and festive evening that left us all feeling melancholy about departing. 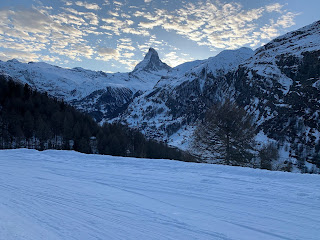 On the drive home we strategically filled up the car on the Switzerland-Italy border in an attempt to avoid Italy’s much higher gas prices.  By the time we made it into Slovenia where we could refuel again, we were making jokes about pushing our car to the gas station since we had a mere 1/32 of a tank left!
Tired but happy, we arrived back at work on Monday to battle with a fresh round of sales GA’s, and Jack began work on a visibility study for (his favorite) a fireboat. The last few days have been engaging and more importantly, very helpful for Metal Shark.

Shout out (happy birthday!) ((and thank you!!!!)) to the guy in the Guinness hat
Shout out to Daria.... Just because she always deserves it
Shout out to Igor for inviting us to the parties