I just peed my pants, it was awesome!!!


We have been busy this week so while Ian and Jackson are cooking dinner, I (Jack) am writing this week’s blog post (by the way I am not the one who peed my pants). Ian put way too many onions in the meat and way too much meat in the very small pan and Jackson is snapping the spaghetti in half because the pots are too small and its shooting small pasta pieces everywhere and I have to clean it all up later. Turns out, all you have to do is to make a couple bad puns and you are free of dinner duty 😊. 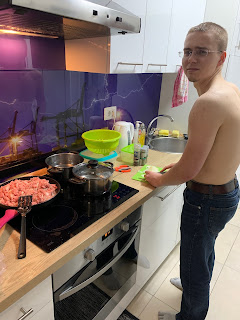 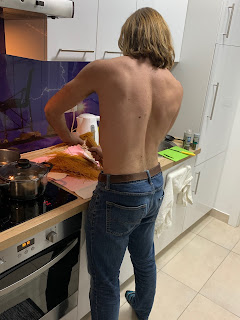 Last Friday we went to Lunch with Daria and Drazen, the Office Manager and Technical Manager of MSB Croatia.  We ate at a small place in Kastav where we had some very good calamari and had a very fun conversation about some of the cultural differences between Croatia and USA. Thank you again for lunch! 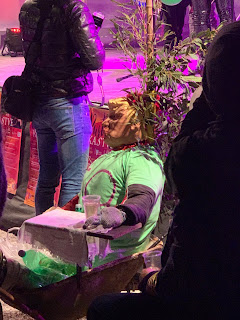 This weekend we had more fun exploring Croatia. On Saturday we visited various towns on the Isle of Krk. The island is pretty empty during the off-season. It was eerie walking past various closed hotels and shops on the waterfront. Though the island was empty, the island’s pristine waters and rocky beaches are something out of a postcard. 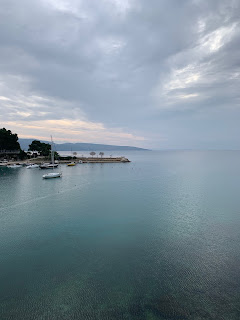 (This is Jackson and Ian and we are going to start helping with the blog, and no we didn’t make that much of a mess)


On Sunday we visited Plitvicka Jezera national park with some of our colleagues and their family/friends. The park is largely a valley, with 133 meter (436 ft) tall waterfalls and breathtaking vertiginous outlooks. It felt like a true winter wonderland as snow fell and we walked along running streams. Croatia continues to astound us with its pristine natural beauty. 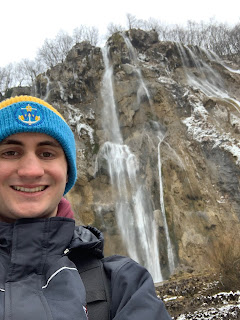 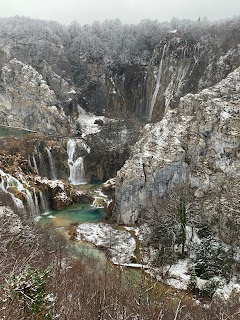 On the drive from Rijeka to Plitvicka Jezera, we passed through another unexpectedly humbling part of Croatia. The small villages, well inland from the more developed coast, still bear the scars of war from two decades ago. Bullet holes and blown out walls are not unheard of here.

After work this (maybe last?) week we visited Trsat castle in Rijeka, which had spectacular views of the city and of Kvarner Bay, ate a magnificent seafood dinner on the Rijeka waterfront, and allowed Jackson to indoctrinate us with Yoga. We also deep cleaned the apartment, and then spent two days hunting down a peculiar odor that was emanating from somewhere in the kitchen (we think it was moldy bread). 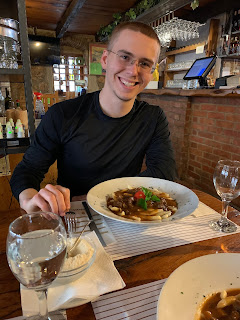 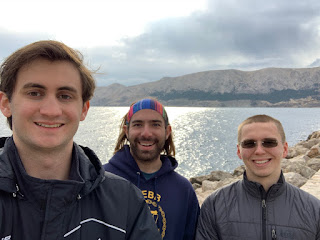 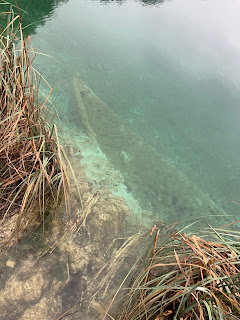 
Google maps for the best unanticipated, round-trip tour of Rijeka


Daria for yet another amazing travel itinerary